I recently had the opportunity to chat with him at the recent show in Wichita Kansas  with A7X and Bullet For My Valentine.

Want to see a drummer truly happy behind the kit? Here he is.

​Shaun: Thank you! I joined August of 2013, wow, this is 4 years, it seems like just yesterday I joined.

M: So, how is it with the band, it seems you are a good fit and get along with everyone?

S: Well, we are all pretty much best friends, I knew Ben for a really long time, I'd met Keith​ before at a Breaking Benjamin show, we never really talked or became friends, I knew of Jason, and I knew of Aaron, it was one of those things, we all got in a room, and it was instant chemistry, we all shared a lot of common interests, and we played together so well, we are truly 5 brothers, it's really cool.

M: At last years shows, you could really see how great you all worked together.

S: Yep, we're up there to have a good time, you know, there's no drama, there's no fighting, we don't argue, we've never had an argument.

M: Fans love watching you have a good time, and enjoy a show with no crap, just rock.

​S: And you can tell with some bands, when you go watch, you can see one person doesn't like someone else, cause there's no interaction, or chemistry, so you can kinda pick up that vibe, so the fans with us can pick up that we truly love each other, and like what we do.

M: When Keith goes to the front of the drum kit, with his back to the crowd, and you and him shred together, that's when you know these guys are more than a band.

​S: Yes, and that was a great picture, I remember that one, it gets a lot of attention, and it shows us rocking the F out!

M: So, you guys have a new record coming out?

S: Yep, new record, should drop around April 13th, is what I was told. 2 songs released off the record right now, Red Cold River debuted at #5 on main stream rock, which is our highest charting since I Will Not Bow, which I wasn't a part of that, Feed the Wolf was shortly after that, both of those songs were in the top 10. They seem to be doing great, the response is awesome, people are liking the heavier aspect of the record. It is truly a heavier record.

M: How long did you guys work on that? Because you toured a lot last year.

S: You know, we don't really write a lot on the road, I know Ben doesn't like to write on the bus, on the road, but, I can tell you from the drumming stand point, I spent one week with Ben in New York, to do pre production, I came back shortly after and tracked that record, in a day and a half. So, we knocked it out pretty quick. We try to be as prepared as we can, cause, as you know, time is money in the studio. When I come into the studio with this band, I know exactly what I'm going to play, and nothing is going to change, because we spend the time together and say, this parts this, and this parts that, and we orchestrate it together, Ben and I.

He will bounce me a copy of the session that we did, and I'll go home and practice to it, to the click, come back out and record it.

S: As far as the recording process, it's cool, everybody wrote on this one, Ben produced it, Aaron did some production, Jason, Keith and all of them, I even had a hand in some lyrics on this one, which is really cool and different.

M: So, how was this different than anything else you've worked on?

S: I've never had that experience, so it was a really weird filling out royalty paper work, I'm a drummer, I'm not used to this, cause just playing drums is not song writing, and that's a big misconception most drummers have, a lot of drummers out there believe just because they played drums and recorded it, they should get a piece of the pie, and I get both sides, but, from being in the business and seeing how it works, I really don't believe you should, I believe you can take a song, and take the drums out, and still recognize what it is. So, if you want the royalties, the publishing and all that, get off your ass, write some lyrics or come up with some chord progressions, do something besides just put down, there's more to songwriting than just drums.

M: How are your nerves now, getting up and playing in front of all those fans, as compared to your first show?

S: You know, it's weird you ask, but, I'm glad you did, the very first night, was actually a two day in a row, two shows consecutive at the same place, both sold out, we started off small, 700 person cap, just to see how it would go, and I remember being so damn nervous, but at the same time, when I got up on stage, I was filled with emotions, so I almost cried, cause it was my dream, I had been wanting to do this since I was a kid. Once I started playing, I just overcame it, and it was like I was playing in any other band I'd played in.

​It took a turn at the end of the last cycle, where I started having major anxiety, stress and nerves, to where I was almost scared to death to get up and play, so I've been in the band for as many years as I stated, and out of nowhere, it just started happening, I think a lot of it, was steamed from getting online and reading the comments from the negative people, there's always going to be, when you're coming in, and replacing somebody, you're going to have those people who like that drummer. In this case, with this band, the band has had a history of great drummers, every drummer that has been in the band has been great, I'm not saying I'm great, I'm saying previous. So, I was getting on there, and reading all this hatred, all this negativity, and I think it got to my head where I was scared to get out there and do what I do, because I'm hated and not appreciated.

So, I told myself to get offline, get off YouTube, quit reading the comments, so now, when videos get posted on YouTube, I don't even look at the comments, I don't care to.

​S: So, I'm basically telling myself, I'm going to go out there, and I'm going to do what I do, if you like it, great, if you don't, great. I'm here for a reason, that's what I'm telling myself, Ben wants me here, so, I'm here, and I'll do the best that I can, so with this tour, it's been great, I've had no anxiety, I've been excited to go play.

M: So, you are doing a little drum solo now? , and I know your thoughts on solos.

S: With this tour, we include a drum solo, which is cool, the crowd seems to enjoy it, it's not over baring, it's like a minute and a half or so, it's just enough, here's a little something. I've been against them up till now, for me, it was like if you have this 20 minute drum solo going on, I always thought of it as does the band have enough material, of great stuff, or are they just taking a break. With this band, I'm biased, because I'm in it, but the band has great material, so I told the guys from day one, I'm never doing a solo, all these songs are great, our set list tonight is pretty much singles, like why do you want to take away from that? So truly, the drum solo now is to give the guys a break, because they're all vocally doing their thing, and that takes a lot of energy.

​M: I knew you didn't care for the drum solo. So, I was surprised to see it.

S: It's not that I couldn't do them, it was more of I didn't want to take away from the show.

M: You are a team player.

S: I wanted it to be about the band and the music, I don't care about me, you know, people are not here to see the drummer, if you have 5000 people at a show, how many are there for the drummer, now days, it's not like a Rush concert, where 80% of the people are there to see the Neil Peart, so, I look at myself as I'm doing my job, playing the songs how they should be played, and I'm playing for the music. It's about the music.

M: Up and coming drummers, some start out playing covers, what advise can you share with them?

​S: Nothing against drum covers, but the one thing that really annoys me is when you see a cover, of a song, that a drummer does, and they completely redo it, ad 1000 splash cymbals to the first verse, and all this craziness, it takes away from the song.

S: Yes! We just started this tour with it, it's a Pearl, I've been with Pearl since 2015, the first kit was a "Reference" then we decided we wanted to go back to a maple shell, so we are using the " Music city Custom" with the maple reserve shell, so now the electronics in the past used to be rubber pads just all over the kit, now you can see the Rush influence, now I have the pads inside drum shells. It's Pearl "Tru Trac" pads, like the "E" Pearl kits. We did away with the SPDX we were using, and we did away with the "TD-11" we were using.

​Stay tuned to the upcoming 2018 tour dates and the latest on the new album with Breaking Benjamin at http://www.breakingbenjamin.com 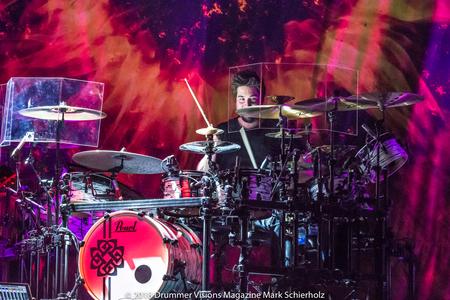 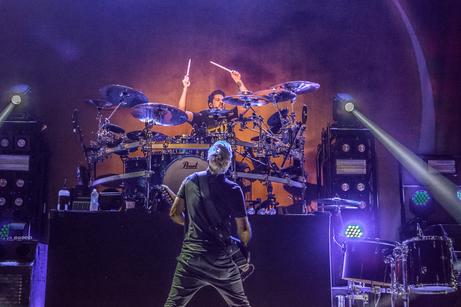 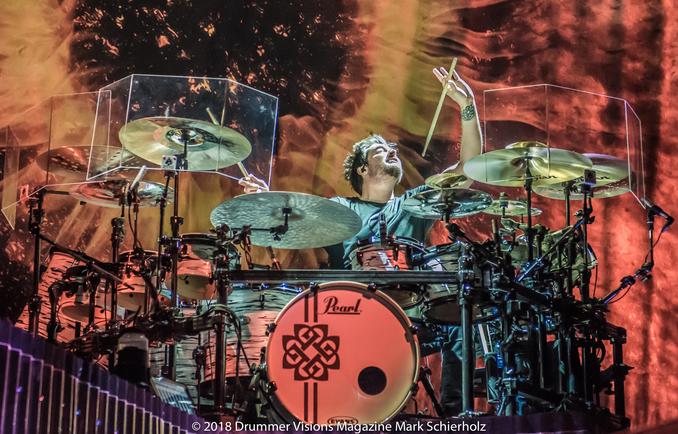 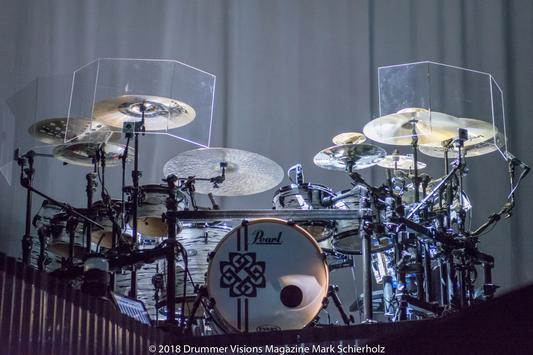 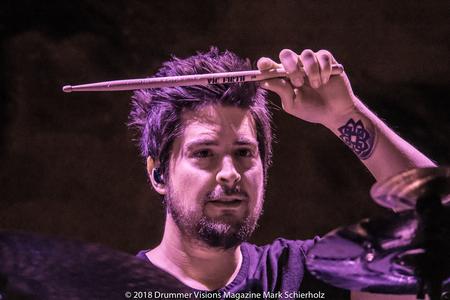