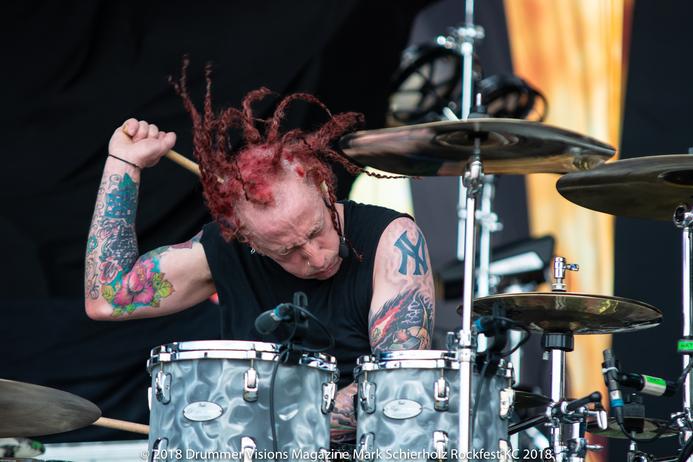 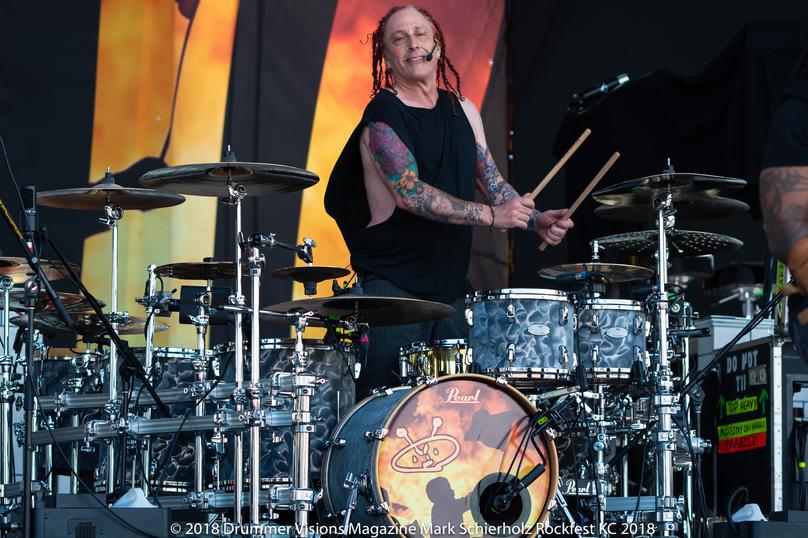 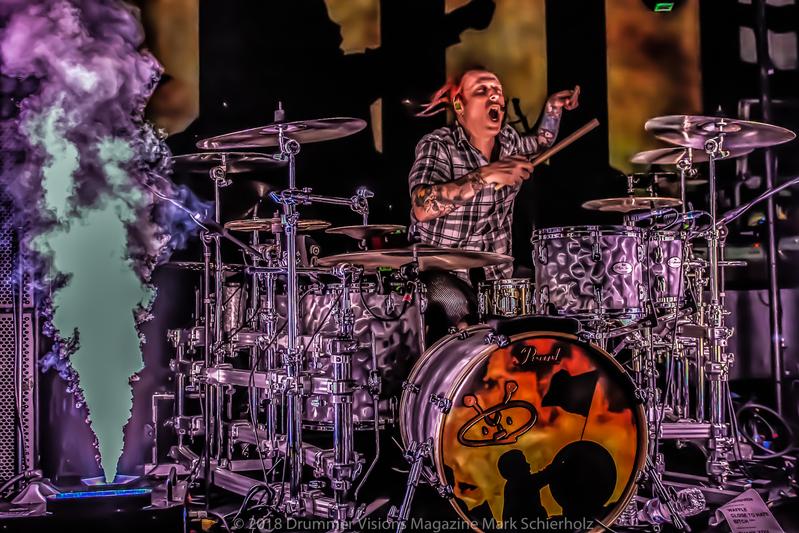 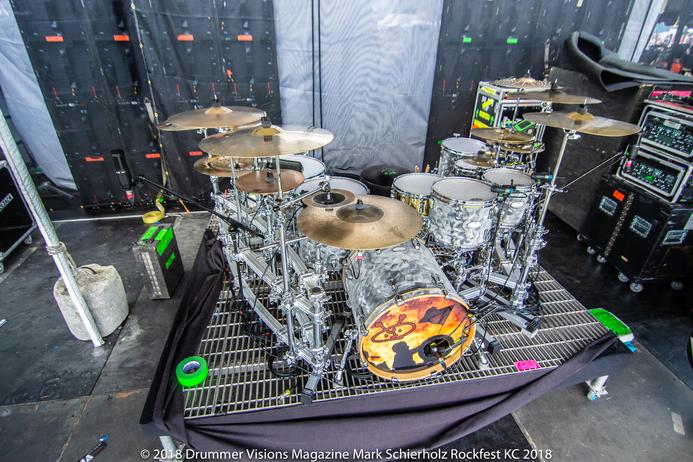 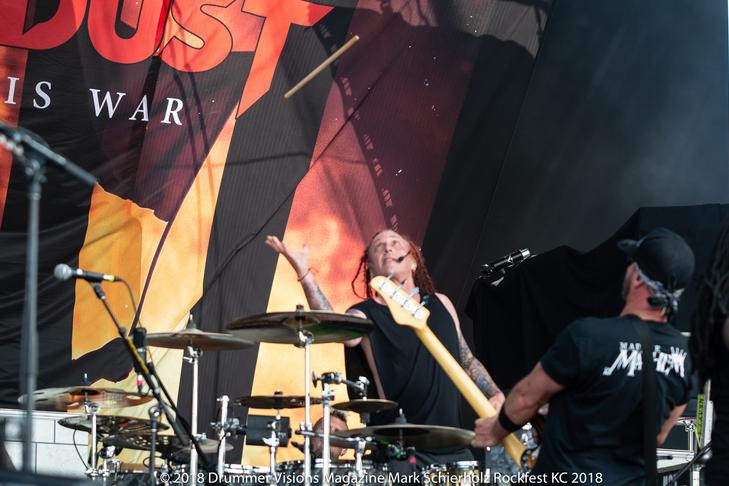 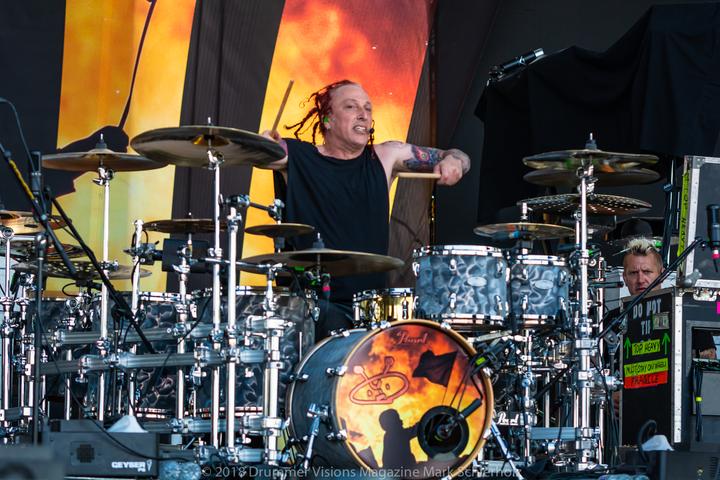 I caught up with him in Kansas City at the Uptown Theater, on their second show of the tour with Clutch and Tyler Bryant & The Shakedown. Morgan is a powerhouse drummer, brings so much energy to the stage.

Morgan, Vince Hornsby, and John Connolly formed the heavy metal band Sevendust in 1994. They released their self-titled album on April 15, 1997.

A short show review of this current tour, this is a must see show.

Morgan: "The album's good, we did it at the end of last year so we sat on it for a long time waiting for the right time to tour, then went out and did some shows and festival stuff and took another two months off and filmed three videos. Then we released "Dirty" as the first single and then we just released "Unforgiven" as the second single." We just just filmed the video for that about four days ago.

Mark: "Now you're on tour with Clutch, not as the headliner, how did this tour come about?"

Morgan: "Our agent urged us to do something different and get out of our comfort zone, headlining and playing with bands that are in the exact same genre. It's kind of a challenge, but we're really close with Clutch, and we took them out with us years ago. We had also done one of our first tours ever like twenty years ago. We love playing with those guys, they're incredibly talented, killer band. It's fun to be on tour with them. The Clutch fan base is extremely loyal and passionate about them. They want to see Clutch, so to win them over is a challenge, and that's something we haven't had to do in a long time and it's fun to have that challenge. We love our people who follow the band and come to see us, but when you're headlining they are there to see you, if they don't want to see you, they leave, because we're headlining, We look out in the crowd and see a lot of Clutch shirts, it's like ok, we have to make something happen here."

Mark: "When you guys get out on stage, is it usually full?"

Morgan: "Yesterday was really good, it was the first day of the tour. Today is number two, I think it'll be really good, we are excited about it."

Mark: "You've played here a few times, Is this about the same size venue you guys are doing?"

Mark: "What got you to play drums to begin with?"

Morgan: "My dad basically started me. He played guitar and he wanted someone to jam with, so he bought me a kit when I was really young. Then I got into sports and kind of deserted playing drums, but it was always something I wanted to do. I had a buddy of mine that said, "I have a band that plays parties and stuff", so I got a kit and started playing covers at parties, no venues or anything. But I liked it so much that I wanted to learn something. I went to MI for six months and never went to school, I just partied, but I met up with some people who were in the scene and I basically played the whole role of being in a band without ever playing. I went back to Atlanta and started playing at parties again, and a band that was from Atlanta came to one of the parties and asked if I'd be interested in playing in their band. I got the gig but they broke up pretty quick. My name was getting around a little more. Then I started another band by myself, and we didn't have the best band but we were determined. The singer wasn't quite good enough. We got rid of almost everyone in the band and put together another band. That one lasted a few years. But there just wasn't a good vibe in that band. So then we started this band."

​Mark: "What's your warm up routine?"

Morgan: "Nothing, there's a few people that don't, I respect the guys that do, and put the time in, I'd probably feel a little better if I did, I basically save every once of energy for that hour and fifteen minute set, and I let it all out."

Mark: "Tell me about your new kit."

Morgan: "I'm still trying to learn how to play it. They build these kits and I just tell them to have fun. They know my basic setup and then they add a few things around it and do some tricky stuff. Nick put it together. He was the drum tech for Breaking Ben, he put it together for me and then my old drum tech Pooch did a week long run with us and modified it a little bit. Eddie came in, they all had their hands on it and I was adjusting it today."

Mark: "So what's your endorsements?"

Morgan: "I like a lot of places. I like it here in Kansas City. I like Atlanta, I don't like the requests that come out of Atlanta which is always stressful, but I love playing in our hometown. New York is always great. LA was one of these finicky places that I didn't like for a long time because it was a lot of arms being folded, but I've enjoyed LA over the past few years. Arizona is great, I like them all. We have such a loyal group of people. It's like a family reunion, we're really close with these people."

Mark: "Do you guys really know how much you touch people with some of your songs?"

Morgan: "We've noticed that pretty early on. We got pretty serious about lyrics, we thought they needed to mean something. It was really just for us, we wrote so many records, one after another, they were like life experiences to us. We're nothing special, we're just normal human beings. The same issues that we have, a lot of people have, but we just wear them on our sleeves, lyrically. I would expect that a lot of people can relate, because we're normal people. We have the same troubles as other people do."