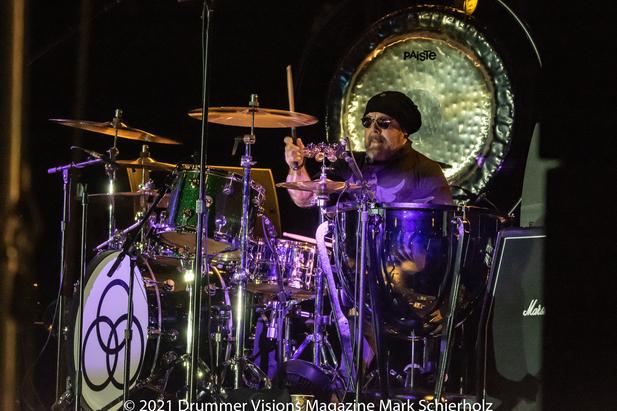 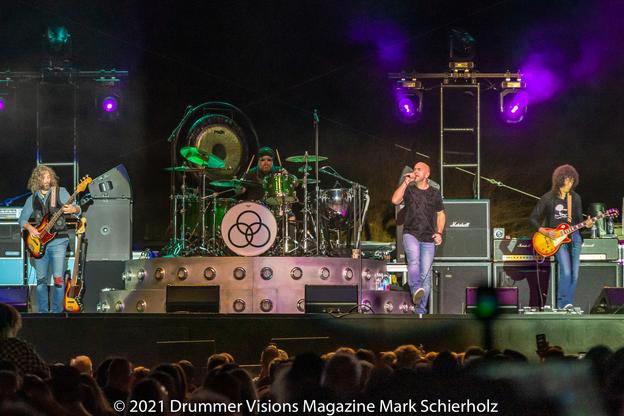 Not the typical song title and mumbo jumbo of most show reviews that are done by journalists for publications and news papers. This review comes from a fan, a concert photographer and drummer that looks at shows differently, and I tell it how it was, and with this tour, I suggest you try to attend an upcoming show, tickets are ridiculously reasonable, and you get more than your money's worth, if you are a fan of Zep music, you are in for a treat. I was given a photo pass, no mention of a review, I am doing it on my own.

Jason Bonham's Led Zeppelin Evening tour made a stop in Laughlin Nevada at Harrah's Casino outdoor venue. Beautiful weather for a great rock show. They are playing songs they haven't played before which was awesome. The show starts with Jason laying out the groove, Jason's not trying to be his dad, he's trying carrying on the legacy his dad started. On this tour he is using a green sparkle DW drum set, much like his dad's original green sparkle Ludwig set. It's a simple kit, as was his dads, kick drum, one tom up, two floor toms down, he is using a Ludwig snare drum, a Timpani to his left, huge gong cymbal behind him, and a Tamborine on the hi-hat cymbals. All as his dad had. Jason shares lot's of stories during the set, this time I heard about his grandma, which was new to the show and very cool. He is one of my favorite drummers.

Vocals from James Dylan, I'm telling you, James has it. This show was the best yet that I've attended, he is on point with all of it, noticed something else, when Jimmy Sakurai the guitarist is playing, James is into it, like a singer should be. Now, I attended sound check, from a distance, while waiting on my pass, so I heard the real raw vocals, no joke, chills, all the way down my body, he really sounds perfect. That being said, and because I'm truthful, there were some sound issues during the show, but it wasn't his voice, I know this for fact. Close your eyes, and you don't know if you are back in the 70's, he's that on point. He's a rockstar.

Jimmy Sakurai the guitarist, he has all the guitars, he plays so smooth, yet just rips it up. He's fun to watch, he takes it serious, he plays with authority, and you can truly see he loves doing this, you can see it in his body and facial expressions, and more in his right hand with the pick, he is even more delightful in person, off the stage and appreciates when people notice the work he puts into a show. He has become one of my favorite guitarists of all time.  Him and bassist Dorian Heartsong have their little moves during the show, which are nice to see.

Dorian Heartsong on bass guitar, super quiet looking, but very animated at the same time, a very great person to have to keep Jason in time, all seriousness, I go back to closing your eyes and listening to the music, you can clearly hear him, it's amazing. Plus he dresses cool as hell. He doesn't just sit there plucking away, he moves around, he has fun, but does his job perfect.

There is a keyboardist back there stage right in the dark, he is very good too.

​But wait, there's more. The drum tech, he is at sound check with the others, I have heard from several people he is the backbone, I believe this after watching him and meeting him. And he speaks very highly of Jason, and since I'm always honest, very highly of Jason, I'll give no details, but Jason is more of a hero drummer to me now that just a favorite drummer, he is at the top of the list of my favorite people ever now. And that is not a joke. Does Jason know who I am? Maybe, if I plop out a photo I took of him, he would. He is now a hero of mine, off the stage, behind closed doors, he is one of the best musician humans that exist.

Overall, and I may be bias to the drummer, because I truly love watching him play, he has put together the best group of musicians ever, to play some of the best music of all time. Is it a tribute band? Nope, it's a father's son carrying on legendary music, with people who truly want to. Top five shows I've ever seen. And since my partner and I wrote a book on his dad, I can tell you this, he's not doing these shows for money, he truly is doing them because he want's to share the music.

I've never done an interview with Jason, I've never asked for any extras at his shows, because I truly love to attend them, I truly love the music and I truly love to stand just feet from him and watch him play, because I feel what he is doing. At each show I've covered for this band there has always been a spot I could shoot from where I can see him like I'm right next to him, that is why I've never asked for more. Very grateful I was granted a pass for this show, it means more than they will ever know. Only my close friends know. If you've seen the show before you know, go see another one, it just get's better. If you haven't seen it before, go see one. No sound glitches can take away from the overall experience, it is an experience, just in an evening now. I saw a little bit of an older crowd at this show, and believe me, a very cool crowd, I was in other areas listening to people's reactions, it was all good. We had great time with the folks we were sitting with, everyone had a great time. I'm not with the band, nothing in this for me, but if you want a fun night out with some great music, go buy a ticket. www.jasonbonham.net

That's my review, no song titles, except for one, my favorite song, Kashmir, over 8 minutes long, and you don't even know they are about to play it, I enjoyed that from the soundboard, highlight of my night. Amazing.