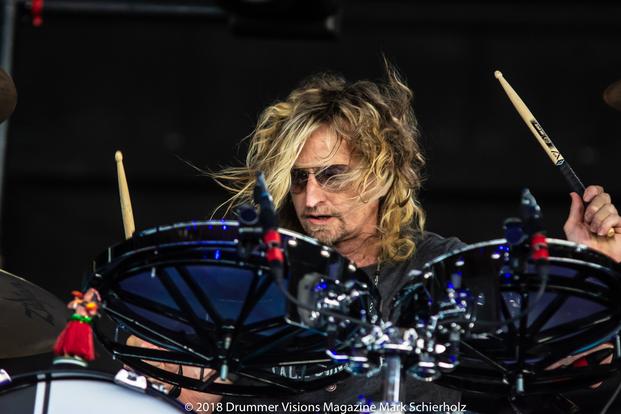 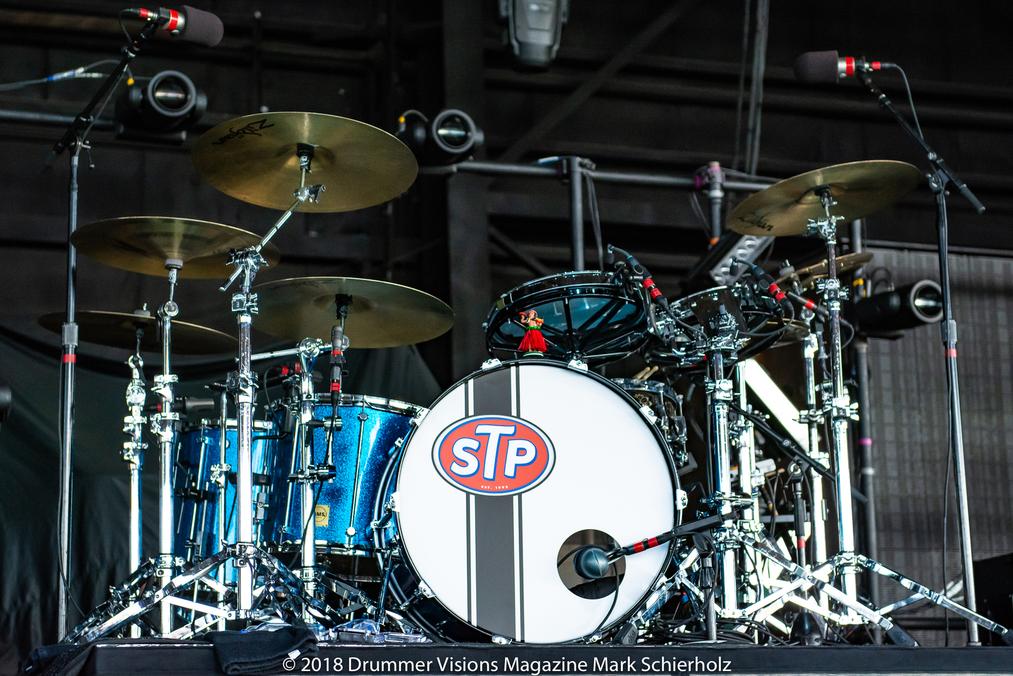 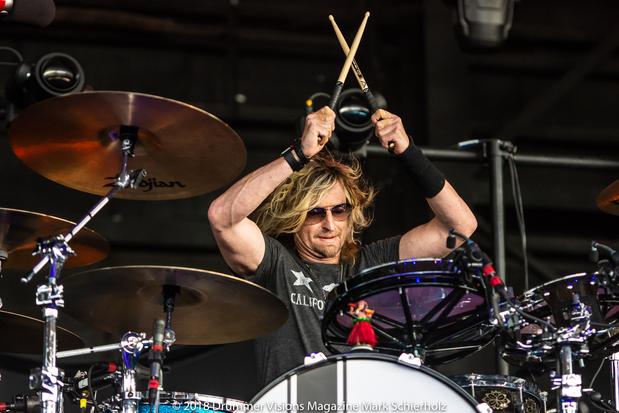 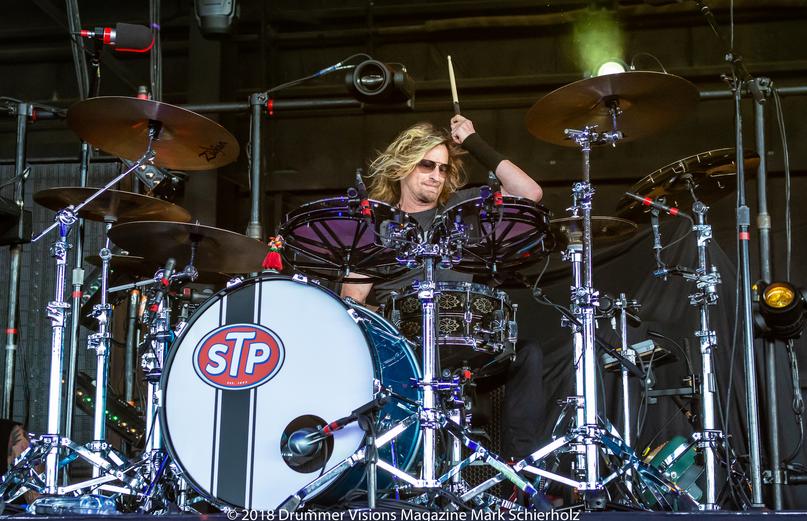 Eric is also the founder and designer of Bomb Shelter Studios in downtown Los Angeles.

STP just released their self titled album on March 16, 2018. We sat down with Eric at the Pointfest festival in St. Louis.

The new album is amazing.

The show in St. Louis showed a sold out crowd that STP is still a headlining rock group.

​Mark: On the road again, with the new self titled album "STP", how is it going so far?

Eric: The new album is going great! It's translating really well live too, so, when we're not doing these festivals during the weekdays, we do our own shows, we'll play like 5 new songs including Roll Me Under, Meadow, Finest Hour. They are so much fun to play.

M: Are you playing any of the new music tonight?

E: We are only playing two of them tonight, we only have a 50 minute set, so it makes it tough. That's the way these festivals are, we only get so much allowed time to get up there and hit it.

M: How much input did you have on this new album?

​E: A few of the songs were completely brought in by Robert Adean, everything else on there would be in a rehearsal studio, either at my place or Robert has a studio, so we get together and jam in those places, someone would come up with a part and we would all jump in, structure the song. With Jeff Gutt singing, it was great, so easy to communicate with, come up with ideas and get inspired, come up with melodies right on the spot. There are very few singers that can just jump in on a jam and have great melodies from the get go. With Dean DeLeo, we've always been able to just anytime, anywhere, someone comes up with a part and boom, we just take off and come up with two or three parts to it. We kinda work around that and get the feel of it. When we are writing the record, it was really fun and really exciting, it was easy, which the writing process should be. The recording process is a bit different, it's not always as easy. There is a certain tone, a certain colorization you're looking for in the production, but the writing process should always be pretty straight forward as far as getting the vibe of the song and putting the energy in, making sure it fits, from there, do about twenty different ideas, that weeds into fifteen songs, then you figure out which ones to record.

​M: Did you do separate tracks, each of you guys?

​​E: This time around, we did separate tracks, for tracking the drums we did about 3/4 at my studio, so I would have Dean play to a click track, that way he is done, then I could do three or four takes, and that way focus more on tone. I do miss the way we did it in the early 90s, which was just live in the room, you'd need a much larger studio with a couple iso booths. Like my studio is a main tracking room and one iso booth. I've done live bands there, and it's great, you get a lot of bleed, the bleed if everyone's working, it totally works. I think it's something we are considering for the next record, going back to that, because we recently did the 25th anniversary of "Core" so listening to the multi tracks of that and hearing the bleed and hearing how much the guitars live in the room.

M: You went from Yamaha drums to that, correct?

E: Yes, I was with Yamaha on the first tour, a good story, the band got signed with Atlantic Records, and I loved the Rock Tour Custom kit. So I went to Yamaha, they said, "well, why don't we see how many records you sell, before we give you a free kit."  So, I said, "thank you very much, go fuck yourself." I went and bought my own kit, used that for a while, when we came around to do Saturday Night Live at the tail end of 1993, I'd been talking to GMS Drums, so they brought me a kit down, I debuted my first kit with GMS for the SNL thing. Right away, just the tone was just night and day, how fantastic Rob and Tony could build those things.

E: Yeah man! it was probably about six years ago I got back into Bill Bruford, from his solo stuff to his King Crimson stuff, and how he was using the roto-toms, because they had so much snap, if you just add a lot of low end, especially if you put the KM86i, which is what Bruford used, the Norman mics underneath, so that way you are getting less attack, and getting more body, but they still had that snap. Whether we're doing like a jam things, or even doing heavy songs like ​Piece of Pie I tune them to dna, tune them to the floor toms as well, so they fucking rumble, without having any shells, and they look totally bitchin too. Sometimes I go back to concert toms and rack toms, for me, I only like the look of a single rack tom up there, you know, the classic Bonham look. But playing the rotos live, especially doing these festivals, all the drummers come up "what the fuck, you can't be playing rotos"

But, the trick is, you have to put them on a rim system, and weld the bottoms, so they don't spin out. They are a little delicate in tuning, but they take a beating man, and are so fun to play. The trick is coated Emperor heads, when you go for the clear and black dots, they sound kinda flat and don't vibrate as much, I think the coated has a little more snap.

M: who are you endorsed by?

E: GMS, Zildjian, and Vater. Zidjian's great, they really take care of me.

M: What's your favorite song to play, for your part?

E: Yeah, for my part, the last run we did in March, we were doing Army Ants​ every night, it's still one of my favorite ones. songs for drumming that are a lot of fun for me, are the ones you just tighten your diapers and go full throttle, and don't stop, like on this run, we're doing Middle Of Nowhere, just songs that just fucking go, and they don't stop. If someone in the band has a problem, it's like sorry! this is a dragster, when we get to 300mph, that's when we pull the parachute and slow down.

M: You guys are getting ready to go out on a run with Bush and The Cult, you excited about that?

E: Absolutely! It's going to be a good tour, we've all seen each other over the years, so everybody's joking around and having a good time, and what's fun, is being in a pack like that, where we're just traveling everyday, it's going to be all arenas.

​E: Yeah, yeah, it's a lot of fun, I'll be jumping up with them and playing a song, they'll be coming over playing a song with us. It's going to be one of those things where we are all here, We are rotating who is headlining every night, so it's all going to keep changing, so we are going to make it a fun summer tour.

Come check out a show, give the new album a listen, look for our dates at www.stonetemplepilots.com or on our Facebook page @stpband

Look forward to seeing you all on the road this summer!

E: John Bonham, who's that? (lots of laughter) my first dog was named Bonzo. The stories and what John Bonham did for rock drumming, we can all find time to talk about Bonham.