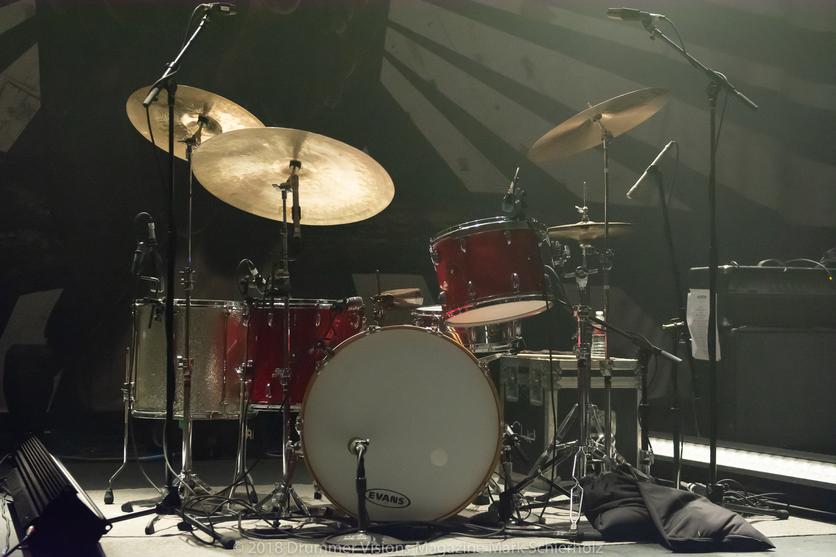 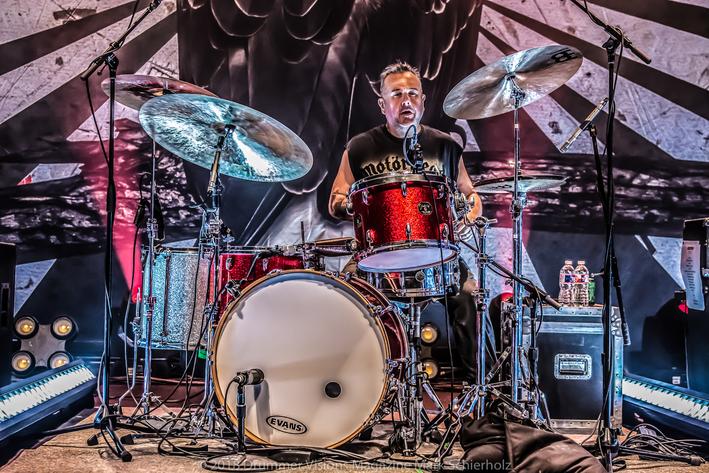 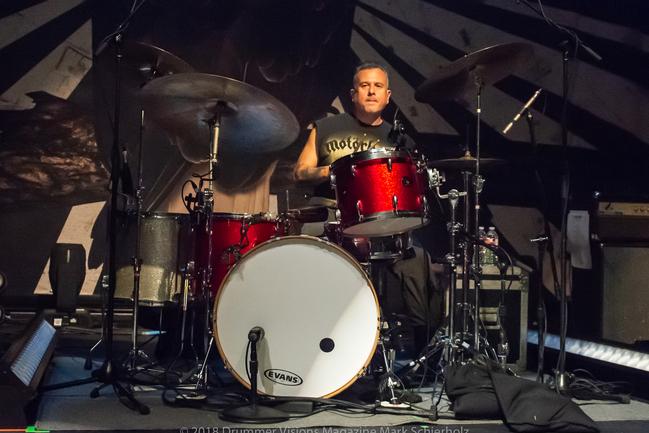 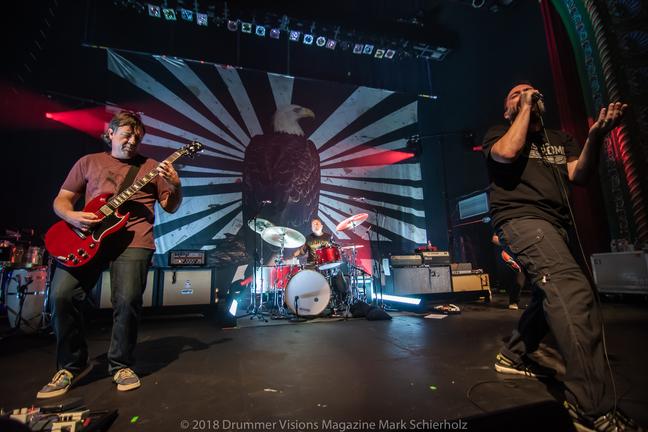 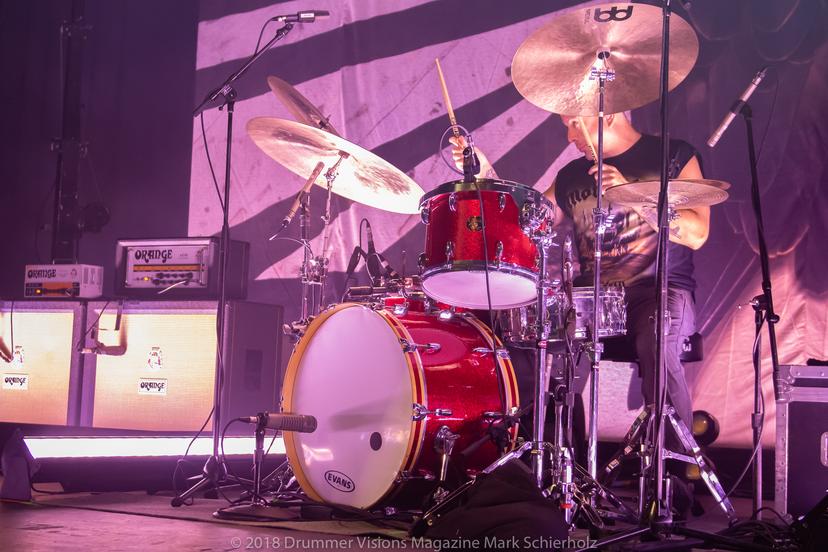 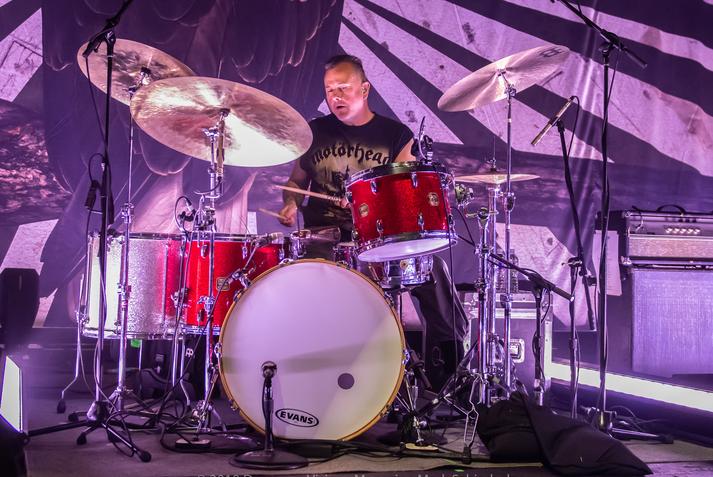 Jean: "I love headlining, I love supporting, I love festivals, I love bar gigs. I enjoy the drums. For me, it's not about the size of the audience or the venue, it's just about playing drums and making the music feel good, and making the people feel good."

Mark: "When did you start playing drums and what got you into drums?"

Jean: "I didn't get my first drum kit until I was sixteen. I became interested in drums when I was about fourteen. That was about the time that I really started paying attention to music. Early on, I was listening to stuff like ZZ Top, AC/DC and Black Sabbath. That's really what drew me in. Bill Ward's playing in particular I found to be very interesting, as a young drummer I started to see connections between what Bill Ward would play in Black Sabbath and stuff I'd heard or seen guys like Buddy Rich or Jean Crouper do. Even before I was a drummer, my father was an advocate of public television. When we would sit around as a family, we would not watch sitcoms. It would be the news and then we would watch public television. They would often have concerts on there. Sometimes it would be a symphony orchestra or a bluegrass group, and sometimes it would be a big band. I can remember very specifically watching Jean Crouper on public television with my dad and my dad explaining to me that Jean Crouper is the best drummer in the world. My dad is not a musician, but I think he has an appreciation for all kinds of music. But he knew about Jean Crouper. When I got into drums, I started to see this connection between what Bill Ward did and these guys from a previous generation. That blew my mind as a young drummer. That began the journey. Then I learned that so many of these drummers I looked up to started playing the drums as jazz drummers, because that's what the drums were at that point. Everyone was a jazz drummer. That really sparked my interest.

Mark: "When did you first get into playing with a band?"

Jean: "I started playing with guys immediately. I got a drum kit and a week later I had friends coming over and we were trying to jam. I jumped in right away. Neil, who sings and plays guitar in Clutch, was one of the first guys I ever played with very early on. We started the band shortly after high school. Pretty much went on tour right away."

Mark: "What kit are you using on this tour?"

Jean: "Gretch USA custom, 14'x24", 10"x14", 14'x16" and 16"x18".   I've never played on a big kit. Just for this tour I broke out the eighteen inch floor tom. I play my own cymbals, I bounce around quite a bit. Right now I'm playing a custom shop twenty six inch ride cymbal and a pair of fourteen inch hi-hats. I don't really differentiate between crash and ride cymbals. I ride on all of the cymbals and crash on all of the cymbals. I play larger cymbals because I feel like I can get more sound out of them and you don't have to hit them as hard. I have a single pedal, I haven't used a double pedal in thirty five years. That style never really connected with me. We used to call it helicopter beat. It isn't interesting to me."

Mark: "So are you endorsed by anybody?"

Jean: "Really my only official endorsement would be my cymbals. I would say I have a casual relationship with the other companies. I like to play what I like to play and I change stuff up. I'm not really brand conscious. That gives me the freedom to do whatever I want to do. My GMS kit stays in England."

Mark: "How's the most recent album been?"

​Jean: "We really just started the tour yesterday. "Book of Bad Decisions" was released last week, it's a record that we recorded in Nashville with Vance Powell. We're very pleased with the way the record came out. We change up our set list from night to night. We play a little bit of everything. We rotate. Tonight is my set list. We go in alphabetical order of first name. We've been doing that for twenty years now. We like stuff to be "fly by the seat of your pants" kind of feeling. There's improvisation through the night. It keeps things exciting. We try to have a unique musical experience. Tonight isn't the show we played last night or the show we'll play tomorrow."

Mark: "Does that get confusing?"

Jean: "Yes, but that's what makes it fun. Certainly there are nights where there will be mistakes made, usually on my part, but that keeps it real. You gotta have those nights that are a little shaky or confusing in order to have those nights where the music just flows. You can't have it every night. You can't have a great set every night. You can try, and we do. There's a freshness about the set for us and the audience has come to appreciate that. When we're in the process of writing songs, we often put new songs on the set list. We have no problem debuting a brand new song that we haven't played more than twice in a rehearsal, in a live show. A lot of bands might be timid about something like that. It just goes back making this thing real. It's a real life rock band playing real music in the moment and I think that sets us apart from a lot of other things going on.

​Mark: " How was the crowd in St. Paul last night, being the first show of the tour?"

​Jean: " It was great! It was the first night of the tour, we were working out some kinks as far as lighting goes, this tour is unique for us in we have a lighting rig and a new lighting director, we've never done that before. Again, new energy, new stuff, and we really thrive on that."

Photographers note. For show number two of a tour, with a brand new light rig and LD, Clutch's set was lit. Some of the best lighting ever, literally almost too much. And the guys are very fun, Well done.

On the Book Of Bad Decisions tour, their new album, released on Sept. 7th, making the second stop on the tour in Kansas City, at the Uptown Theater. Jean loves to play drums, more, him and the band love to play to the crowd, and give them an experience.